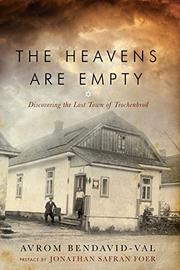 THE HEAVENS ARE EMPTY

Discovering the Lost Town of Trochenbrod

A methodical chronicle of a once-thriving farming town in western Ukraine that was obliterated by the Nazis and resurrected by witnesses’ testimonies.

Bendavid-Val’s father grew up in Trochenbrod and emigrated as a young man, skirting the Holocaust, but the author craved to know more about the small town’s history. In 1997, he visited the area and spoke extensively to early survivors. While viewing the mass grave site, he encountered an elder who “had been waiting over fifty years for someone to ask him about it.” Bendavid-Val embarks on a journey through the history of the town, the setting for Jonathan Safran Foer’s novel Everything Is Illuminated (2002). Trochenbrod was essentially a vibrant Jewish town, with a turn-of-the-century population of 1,600. Farming in the marshland was difficult, and the Czarist army demanded conscription. Many youths emigrated elsewhere, especially to America, although there was also a Zionist movement, and even a Catholic church built in the late ’20s, thanks to Polish Prince Radziwill. The town endured domination by the Polish, Soviets and Nazis, respectively, though since the last great war the villagers believed, naively, that the Germans presented a more tractable authority than the Russians. By June 1941, the Nazis had put in place a system of occupation, terror and murder. The anti-Jewish Ukrainian Nationalists working with the Germans assured the Jews’ destruction, and during a few days in August 1942, most of the 4,500 Jewish inhabitants were shot and tossed in pits. The author ends this heartfelt account with three testimonies by people who somehow escaped that fate (only 60 survived).

A well-organized resurrection of yet another lost memory of the Holocaust era.