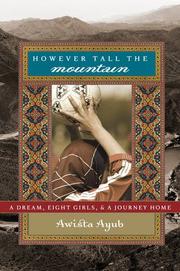 HOWEVER TALL THE MOUNTAIN

After three decades of war in Afghanistan and five years under the brutal strictures of the Taliban, liberties for girls were gradually erased, from going to school to participating in sports. Ayub’s family fled to the United States in 1979. Growing up an athletic girl in Connecticut, the author learned Pashto and kept in touch with her cultural heritage. In 2003 she sponsored a group of eight Afghan girl athletes to come to America and train for six weeks in preparation for the 2004 International Children’s Games in Cleveland. The girls, ages 11 to 16, had been brought together to practice for some weeks previously at the Afghan Center in Kabul, though the author met them for the first time when they arrived in America in June 2004. In careful, descriptive prose, Ayub introduces each of the girls by way of her personality and family story. Samira, who became the goalie, wasn’t able to attend school in Kabul from age five to ten because of the Taliban’s edict against girls’ education; Robina, the forward and natural leader, had taken to the streets with her numerous siblings to scavenge; the sisters Freshta, a forward, and Laila, a defender, were refugees from Pakistan. Ayub moves back and forth in time to follow the girls’ development, chronicling how the single team eventually evolved into an entire organization, the Afghan Youth Sports Exchange. The narrative is occasionally disorientating, but Ayub offers a deeply sympathetic look at these girls and their immensely complicated existences.