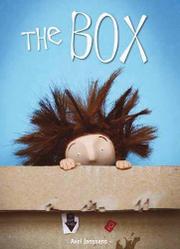 All those anecdotes about how children prefer playing with a big empty box instead of the present inside pop up in this earnest little tale translated from the Dutch.

Leo has a new red bike, of which he is very proud. While riding it around the schoolyard, however, he crashes into a big cardboard box that Kenny is sitting in. Leo falls and is pretty annoyed, but Kenny announces that he was hiding in the box to escape a rhino. The box transforms into a car to aid Kenny’s escape, but the jungle presents tough terrain, so it turns into an elephant, with Kenny’s box a basket on its back. The box continues its transformations as Kenny’s stories get even more elaborate. Each time Leo declares the impossibility of a transformation, Kenny calmly refutes it. Eventually all the children want to join Kenny in his adventures in the box, and even Leo decides the box is way more fun than his shiny red bike. The illustrations seem to be photographs of three-dimensional figures and collage, with the children, beasts and objects molded from some kind of claylike substance. Kenny has wild, stand-up hair, and the group of children is ethnically mixed. The endpapers are a close-up image of a corrugated cardboard box—just right.

The art is striking, even if the text is a little too preachy.