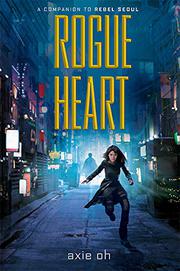 From the Rebel Seoul series, volume 2

A telepathic 18-year-old in Neo Beijing in 2201 is haunted by troubling memories and assaulted by her exquisite sensitivity to others' thoughts.

All Ama has wanted since escaping the Alliance government lab that turned her and two other teen orphans into experimental supersoldiers is to lie low, enjoy her newly found freedom, and forget the boy who betrayed her. All of that changes, though, when, two years after her escape, the Alliance tries to assassinate her while its opposing faction, PHNX, attempts to convince her to join their rebellion. How will Ama sort out her complex feelings for those close to her who remain loyal to the Alliance, those loyal to PHNX, and those loyal only to themselves? The novel is narrated in the first person by Ama, allowing readers to become acquainted with her personal history through her inner monologue. Oh deftly and seamlessly weaves fast-paced action, futuristic technology, the East Asian cultures and languages of the Neo Council, inclusive relationships, and a new spin on K-drama romance into the Blade Runner–esque universe she first shared in her previous, companion novel Rebel Seoul (2017). However, Asian people, as well as their families, lovers, partners, friends, and cultural practices, are the main characters here instead of simply an exotic backdrop.

A fantastic, fun, and fast read for fans of Stranger Things, The Hunger Games, Pacific Rim, and romantic Korean dramas.