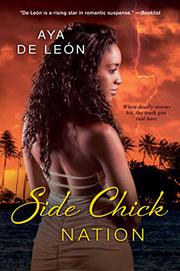 Everything changes for Dulce Garcia, perennial party girl and sugar baby, when she meets Zavier, a freelance journalist, on a plane to the Dominican Republic, then gets caught in Puerto Rico during Hurricane Maria.

Dulce, whose parents were Cuban and Dominican, was born in Puerto Rico and has bounced her whole life between the mainland U.S. and the Caribbean. After having been groomed into prostitution while she was in high school in New York—“Dulce always remembered how she was fourteen and wearing a Minnie Mouse t-shirt when she met Jerry,” her pimp—Dulce escaped with the help of Marisol Rivera, the former director of a New York health clinic, but she's soon under the thumb of another abusive boyfriend. Seeking refuge with an aunt in the Dominican Republic, she meets Zavier, a young freelance journalist, as well as Phillip Gerard, a rich businessman. A couple of dates with Zavier has her falling for him, but then Gerard lures her with a luxury hotel stay and a shopping spree, and she convinces herself she didn’t deserve a sweet relationship anyway. Dulce travels with Gerard to Puerto Rico and decides to stay there, then winds up stuck on the island when Maria hits. Meanwhile, Marisol’s Puerto Rican cousins are in dire straits after the hurricane takes out their home, and as they and Dulce make their ways to safety, their stories will converge. Dulce reconnects with Zavier, whose press credentials give her opportunities she never dreamed possible even as their relationship fractures, while her connection to Gerard is of great interest to Marisol, who targets him for a cryptocurrency sting after he raises money ostensibly to help the island but then uses it to acquire prime island property at rock-bottom prices. The fourth title in de León’s genre-bending Justice Hustlers series is a multifaceted tale. On one level, it's an entertaining feminist heist tale with a satisfying Robin Hood–style caper or two, but where the book truly shines is in spotlighting the challenges facing former sex workers and in angling an unflinching lens on the plight of Puerto Rico, both before and after the Maria disaster.

An absorbing, enlightening book that exemplifies the power of good storytelling.