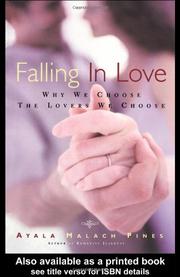 Why We Choose the Lovers We Choose

A couples— therapist’s clinical look at how and why we fall in love removes some of the mystery from that most magical of human experiences. Pines (Romantic Jealousy, 1992; Keeping the Spark Alive, 1988), a social psychologist and researcher who is also a clinical psychologist specializing in relationship issues, tackles her subject from both perspectives. As a social psychologist and researcher she analyzes how we fall in love; her clinical experience and psychodynamic theories come into play in the exploration of why we choose a particular person. She draws extensively on three studies: interviews with 100 men and women about their romantic relationships; a cross-cultural study comparing American and Israeli accounts of falling in love; and interviews with 100 couples comparing their reasons for falling in love with later stress in their relationship. Pines describes falling in love as a staged process. First is geographic proximity; then a state of emotional arousal; awareness of the other’s appealing appearance and personality; discovery of similarities; and finally, with growing intimacy, the revelation of deeper psychological needs and the mutual ability to satisfy them. Gender differences and the evolutionary, social, and psychoanalytic theories that seek to explain them are also examined. As to why we fall in love with a particular person, Pines looks at various psychological theories and concludes that an internal romantic image plays a key role in whom we choose and that childhood experiences of love shape this image. Interviews with four individuals reveal how early relationships with parents affected subsequent romantic ones; Steve, for instance, was abandoned by his father and terrified of the live-in boyfriends of his cruel and demanding mother. He fell in love with a domineering woman and found the relationship exciting but scary, and he remains unattached. Not a how-to guide for the lovelorn but a serious, research-oriented work of special interest to those involved in couples— therapy. (11 b&w photos) (Author tour)