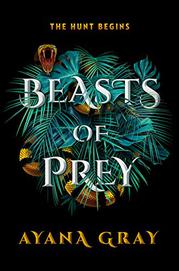 Opposites come together hoping to capture a menacing creature, only to find a greater purpose.

Ekon Okojo, studious and cautious, aspires to continue his family’s legacy as a Son of the Six, one of the city of Lkossa’s class of anointed warriors. Passionate and impulsive Koffi, who dreams of being free, is an indentured beastkeeper of the Night Zoo—a collection of exotic species owned by the greedy Baaz Mtombé. In the span of a single night, their paths cross and their destinies are forever altered: Ekon is cast out of the warrior class, and Koffi faces a lifetime of servitude. The pair form a tenuous partnership and venture into the Greater Jungle to hunt the Shetani, a powerful, vicious monster, hoping this will solve both their problems. As they are both headstrong and mistrustful, they get off to a rough start, but they become closer with each brush with death. Their quest for vengeance on the Shetani, which is wreaking havoc on Lkossa, turns into something more when they make an unanticipated discovery. Saving their village—and humanity—comes down to Ekon’s warrior instinct and Koffi’s ability to control the magic her people call the splendor. This pan-African story, rife with betrayal and narrated through poetic language that evokes vivid imagery, will ensnare readers, keeping them engaged with its energetic pace. The beautiful blend of mythology, romance, and action ends with a hint at more to come. All characters are Black.