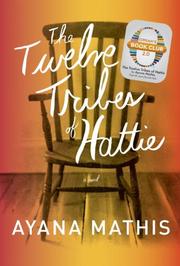 THE TWELVE TRIBES OF HATTIE

The legacy of the Great Migration from the 1920s to the 1980s infuses this cutting, emotional collection of linked stories.

The central figure of Mathis’ debut is Hattie, who arrived in Philadelphia in the 1920s as a teenager, awed by the everyday freedoms afforded blacks outside of her native Georgia. But the opening story, “Philadelphia and Jubilee,” is pure heartbreak, as pride and poverty keep her from saving her infant twin children from pneumonia. Though Mathis has inherited some of Alice Walker’s sentimentality and Toni Morrison’s poetic intonation, her own prose is appealingly earthbound and plainspoken, and the book’s structure is ingenious: It moves across the bulk of the 20th century, with each chapter spotlighting one of Hattie’s nine surviving children. (The title’s “twelve tribes” are those nine children, plus the infant twins and a granddaughter who’s central to the closing story.) Each child's personal struggle is a function of the casual bigotry and economic challenges in the wake of Jim Crow. Floyd is a jazz trumpeter and serial philanderer who awakens to his homosexuality; Six is a tent-revival preacher who comes at his profession cynically, as a way to escape his family; Alice is the well-off wife of a doctor with a co-dependent relationship with her brother, Billups; and so on. The longest and most disarming story features Bell, who in 1975 starts a relationship with one of Hattie’s former boyfriends, highlighting the themes of illness and oppressiveness of family. Mathis will occasionally oversimplify dialogue to build drama, but she’s remarkably deft at many more things for a first-timer: She gracefully shifts her narratives back and forth in time; has an eye for simple but resonant details; and possesses a generous empathy for Hattie, who is unlikable on the surface but carries plenty of complexity.

An excellent debut that finds layers of pathos within a troubled clan.