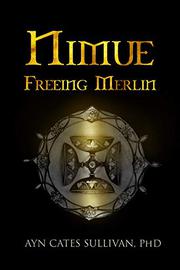 An American teen discovers her connection to Celtic myth and Arthurian legend in this YA fantasy adventure, the third installment in the Legends of the Grail series.

Seventeen-year-old Nina Liber lives in Manhattan with her mother, Diana, an expert in Celtic mythology. Before their flight to Britain for the summer, Nina dreams of a woman in green who calls her a “Mage” and tells her, “remember who you are.” Diana’s husband, Felix, has been deceased two years, and she’s eager to see her twin brother, Blaise. Nina is skeptical about enjoying sights like Stonehenge and being away from her boyfriend, Owen Pelleas. Once in Hampstead, England, Nina befriends Daphne, her uncle’s occasional flame. Daphne recommends the girl visit Ganieda, a local healer named after Merlin’s sister, to gain peace of mind. Ganieda outlines the relationships between the mythical huntress Diana; her lover, the Roman god Bacchus; and their daughter, Nimue. When she hears of Nina’s dream, she echoes the woman in green by saying, “Mage, it’s time you remember who you are.” Later, a limo takes Nina to a country home called Imworth, where she meets Morgen, the woman from her dream. She tells Nina, “You were Nimue. Only you can find and awaken Merlin” and restore the balance between light and darkness on Earth. Sullivan might have written a fantasy in which her lead throws punches while hunting for relics. Instead, she’s more faithful to Merlin’s complex mythology than to the genre’s tropes. Readers will be reminded of the ways Romans used Christianity to subdue the Druids, who had their own belief system. And while Nimue and Merlin’s romance is intense—they kissed like “a tsunami crashing onto shore”—it’s just a portion of their lives, not the entirety. After seeing her previous incarnations, Nina comes to realize she’s “the power of the universe operating as a point in time and space” and that it might be possible to usher in Satya Yuga, the Golden Age, by reconnecting with the natural world. Lovely black-and-white illustrations by Crow duCray enliven the journey. A glossary is included.

This exuberant fantasy calls on readers to conceive of a loving, balanced world.