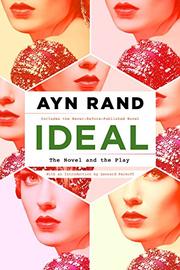 Someone somewhere, an acolyte or junior editor, thought it was a good idea to pull up a novel that Rand, the late cult writer and Social Security recipient, had kept in a drawer—and kept there for good reason, having tried the story in both prose and drama forms and preferred the latter. The setup is one of those Death Takes a Holiday morality plays so beloved in the days before Ernest Hemingway taught writers how to be vigorous: a Hollywood star, wanted for murder and on the lam, decides to test the adoration of six fans who had written her adoring letters—and, being a Howard Roark in furs, finds them wanting. Penned one, “Do you wonder why I am writing all this to you? It is because when I look at you on the screen, I know what it is that I want of life.” Yes, but is it what Kay Gonda wants? No, and what Kay Gonda wants, Kay Gonda gets. Kay, natch, has reason to be disappointed: she kills with kindness, like a lioness thinning a herd, but one unappreciative lumpenprole (“Aw, shut yer old face!”) dares hint at the possibility of turning her in for the fat reward offered in light of her crime. (And was it a crime? Ah, dear reader….) One character is a socialist on the way to repentance, another a cynic, another a soul-saver: they’re not characters but types, in trademark Rand fashion—for Rand, though certainly no socialist, traded heavily in social-realist symbols. The play version is a touch more successful if only because it’s a touch less talky (says Kay, imperiously cutting to the chase: “You can throw me out, if you wish. You can call the police, if you prefer. Only do so now.”). Still, neither leaps from the page to scream in testimonial to the author’s genius.

The two versions, though, are useful to students of Rand’s work—and there’s a dissertation waiting in her use of the stilted possessive. Otherwise, a mere curio.