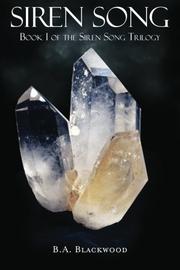 In this trilogy opener, Blackwood pulls readers into the world of fallen angels through the eyes of Ariel, a spunky college freshman.

Blackwood starts the action almost immediately, barely introducing Ariel before she’s attacked by someone demanding she give him something called the Piece of Home. She’s knocked out during the encounter and wakes up in a hospital to find Michael, the most gorgeous guy ever, who takes a sudden interest in Ariel that sometimes verges on being bipolar (although that’s explained later). Ariel continues to be randomly attacked, which leads her to force some answers out of Michael. She finds out that she was adopted and that Michael is a Descendant, a half-human child of an Exile, or fallen angel. The angels that fell from heaven split into two groups—those still following Lucifer and those who realized their mistake. Ariel learns that her biological mother found the family’s Piece of Home and the angels believe Ariel now has it. The book’s fast-paced action is easy to follow while still being suspenseful, and despite some one-note duds, most of the characters feel natural and help add depth to Ariel’s adventure. Especially likable is Barnaby, the goblin she befriends in the Exiles' sanctuary, who watches her back mostly via text message. Smart, strong Ariel is fairly likable, although she has an annoying habit of making acronyms out of seemingly everything. Her supposed love of complicated vocabulary isn’t particularly flattering since she tends to use big words sparingly, like someone trying to impress friends with words he or she doesn’t quite understand. Michael, on the other hand, is a stiffer character, and some of his actions don’t seem to make much sense. For this volume, their budding romance stays in an awkward stage that doesn’t really affect the plot, although that’s sure to change as the story progresses. Some solid twists and turns make for a quick, enjoyable read that promises to grow deeper in the next chapters.

An intriguing premise navigated by an affable heroine.