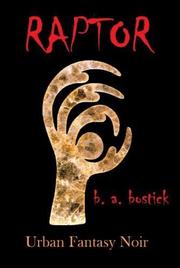 As a Raptor, Ariel just tries to get the job done: kill a shady lawyer named Nicolai Tesslovich, who—unbeknown to most humans in their city—also happens to be a demon. She beheads him in an ambush at his office, where she also rescues a bound-and-gagged private detective named Frank Bishop, who’s investigating the disappearance of several children. Bishop and Ariel join forces, and, along with a young vagrant hacker named Mouser, they learn that whatever’s happening is bigger and darker than they’d anticipated. For one thing, Tesslovich shows up in court—in a neck brace but unquestionably alive. Sister Mary Catherine, the tough nun who operates a runaway shelter, tells Bishop that more young people are disappearing. And all the clues seem to converge on a biotechnology mogul named Yamazaki “Zaki” Kiriyenko, who’s built a massive lab guarded by sentient gargoyles and invites the city’s elites to his personal stadium to watch fighters in vicious hand-to-hand combat. At the height of the probe, Mouser disappears. Ariel and Bishop must venture into the city’s network of underground tunnels, “the Deeps,” and ally with werewolves and a scientist with a score to settle with Zaki to infiltrate the lab, rescue Mouser, and prevent the worst from happening. Bostick’s (Reptyle Dysfunction, 2013) novel overflows with characters and plot twists, which can make the story bewildering. The structural descriptions of the tunnels and the interiors of long-abandoned shopping malls may test readers’ patience. At the same time, that profusion is impressive—the myriad characters are joined by a tangled web of relationships, but the author fluidly manages the players and their overlapping, intersecting plotlines. The back-alley ambiance is a little overpowering at times—the grimy bars too grungy, the stakes disproportionately high (the fate of the world, of course), the dialogue overly hard-boiled: “I’ve been surfing the minefields of the information highway. It’s been wild. The off-route blog-o-sphere is rife with rumor if you can mole your way into it without getting nuked.” But overall, the tale remains absorbing, and Bishop displays a winning, dry wit. After he’s put in charge of a ragtag band of children, he thinks: “Great! I’ve been adopted by the road company of ‘Lord of the Flies.’ ”

A gritty and engaging, if dense, supernatural noir thriller.

HOME IS THE PRIME MERIDIAN
by Bill Felker
Indie

CITY OF THE LOST
by Stephen Blackmoore
Newsletter sign-up