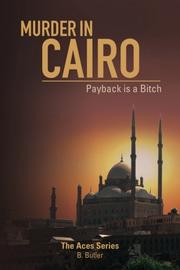 MURDER IN CAIRO; PAYBACK IS A BITCH

In Butler’s debut thriller, the first in a planned series, four American women go to Egypt to rescue their friend from her murderous husband.

Cami’s marriage to Egyptian army general Abdul hasn’t given her the life she wanted. Her sadistic husband beats her, and when she doesn’t give him a blue-eyed son, he takes their daughter away. She calls her friends—hotel-chain VP Sasha, hospital consultant Barb, and recently retired CIA agents Laura and Ashley—who all belong to an informal club called ACES. The women quickly formulate a plan to get Cami out of Cairo and soon learn that Abdul has beaten her so severely that she’s been hospitalized; it turns out that Cami had recently discovered Abdul’s secret torture and murder room, complete with his mummified victims. Butler’s fast-paced novel offers four female American counterparts to James Bond, who’s referenced multiple times; at one point, Barb dubs herself “007.5.” The former agents demonstrate their skill and cunning, but Barb is the most invigorating character, as she transforms from the type of person who says “deep doo-doo” to an action-oriented woman dodging deadly assaults. By the end of the story, after a couple of impressive twists, it’s clear that Barb has changed the most of any single character. The novel describes Egypt as a beautiful country of pyramids and markets but presents most of its male characters as violent thugs, all loyal to Abdul. The repeated mentions of Abdul’s atrocities seem excessive, since his actions within the first few pages will likely make most readers hate him immediately. The story also introduces a covert organization, “The Unknown Eight,” which targets vicious criminals, but doesn’t fully explain it; hopefully, this clandestine group will be expanded upon later in the series.

An often engaging tale of action and espionage in an exotic locale.

FROM RUSSIA WITH LOVE
by Ian Fleming
Fiction

TOMB OF THE GOLDEN BIRD
by Elizabeth Peters
Newsletter sign-up