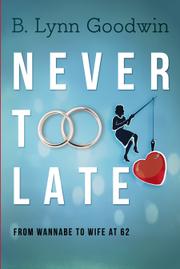 From Wannabe to Wife at 62
by B. Lynn Goodwin
BUY NOW FROM
AMAZON
BARNES & NOBLE
LOCAL BOOKSELLER
GET WEEKLY BOOK RECOMMENDATIONS:

In this memoir, a woman describes her journey from a solitary life to marriage at age 62, frankly analyzing potential risks along the way.

Goodwin (Talent, 2015, etc.) was in her early 60s with a successful teaching career, many friends, and a loving dog, but she felt that something was missing in her life. For one reason or another, she’d never made a lasting romantic connection with a man, and, as she neared old age, her loneliness weighed on her. Still, she notes in this memoir, no one was more surprised than she was when she started dating a man whom she met on Craigslist. At first glance, she and Richard Brown appeared to have had more differences than similarities. He was the devout minister of a small evangelical Christian church, while her upbringing was casually Episcopalian; he’d been married twice—the second time only six weeks after his first wife’s death—while Lynn had never been in an intimate relationship. Most challenging of all, she says that Richard believed that the Bible gave men final authority in the household; Goodwin had built a life as a strong, independent woman. One by one, she confronts her doubts with openness and honesty in this memoir, relating it all with convincing clarity and a refreshing lack of sentimentality. This isn’t a conventional love story; rather, it’s a mature assessment of the pros and cons of having a relationship. Even as she enjoyed her newfound intimacy, she constantly questioned whether to commit herself to the partnership: “Clearly a man who didn’t listen to me wasn’t the right choice. Except that he did listen—whenever he remembered to.” Indeed, this questioning sometimes gives the narrative an ominous tone, as when the author describes the pressure to marry: “And even though he didn’t say it, in the back of my head I heard, you know what happened to my last girlfriend when she hesitated too long.” As a result, some readers may still wonder about her final decision, even after the preordained happy ending.

A candid, revealing portrait of an unconventional love story.