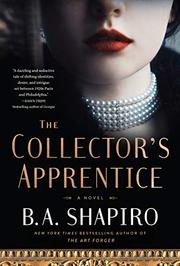 A woman with a shameful past, now in search of revenge and her family’s forgiveness, finds herself assisting an irascible patron of the arts who is building one of the world’s great private art collections. But will his paintings ever be hers?

Inspired by the story of Philadelphia’s famed Barnes Foundation but fictionalized with a sizeable swirl of sensationalism, Shapiro’s (The Muralist, 2015, etc.) latest art-world novel spans three timelines involving Belgian Paulien Mertens, who grew up in a home graced by a collection of valuable art, including seven modern works by groundbreaking postimpressionists including Cézanne and Matisse. As the novel opens in Paris in 1922, Paulien, aged 19, has been banished from her home and family, which has been bankrupted in a Ponzi scheme launched by her fiancé, George Everard. Flashing back periodically to 1920, the novel shows how innocent Paulien fell into George’s trap; flashing forward to 1928, it reveals her reincarnated as Vivienne Gregsby, on trial for the murder of Dr. Edwin Bradley, a rich American chemist who was amassing a vast collection of postimpressionist art, including those seven Mertens paintings which Paulien dreams of restoring to her father. The central 1922 thread traces Paulien’s rebirth as Vivenne, her developing involvement with Bradley, and her move to the U.S. and yearning to inherit his collection herself. But whether flirting—and sleeping—with Matisse, palling around with Gertrude Stein, reuniting dubiously with George, or plotting in secret against Bradley, Paulien is a character short on both conviction and charm. And as the tale enters a late, repetitive spiral of machinations, a credulity-stretching mood intensifies.

Less might have been more in this increasingly convoluted fusion of history and fantasy centered on an ambiguous central figure.