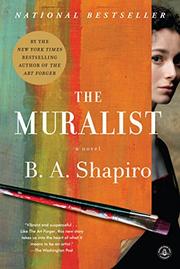 A political artist disappears and, 70 years later, her great-niece determines to find out why.

Shapiro takes a familiar ramp to launch her new mystery—a young woman goes missing. The author of The Art Forger (2012) returns to the canvas of art history to portray her titular figure, the muralist, one Alizée Benoit. She is, of course, “charismatic, headstrong, and talented.” She is—must be?—a fragile beauty who “captures the room” and, quite briskly, the attention of Eleanor Roosevelt. Benoit paints for the Works Progress Administration, circa 1940, and lives with “no hot water, no heat on weekends” in Greenwich Village. Her contemporary great-niece, Danielle Abrams, toils in an auction house and pines to know why her aunt vanished. Shapiro toggles her very short chapters between Abrams in 2015, searching for clues in plucky first-person narration, and the lost Benoit era depicted through an omniscient voice. With her Jewish relatives imperiled in Europe, Benoit agitates politically, paints boldly, and pals around with her gang: “Jack, Bill, Gorky,” “Lee and Mark”: Jackson Pollock, Willem de Kooning, Arshile Gorky, Lee Krasner, and Mark Rothko. The immortals of abstract impressionism drink, argue, and flirt with the muralist. But don’t expect the derivative deliciousness of The Paris Wife: the dialogue is wooden; the characterizations predictable. Mark’s kisses are invariably “light,” and he wants Benoit only one way: “desperately.” Occasional sentences are howlers.

Eleanor Roosevelt’s deep, end-of-life regret that the United States barred thousands of Europe’s Jewish refugees adds poignant color to this story, but Shapiro tries too hard to make her fiction into moral instruction.