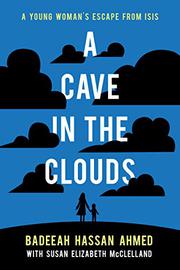 A CAVE IN THE CLOUDS

A Young Woman's Escape from ISIS

This book chronicles the traumatic story of Ahmed, a young Ezidi woman who was abducted by Islamic State group forces from her village in northern Iraq and subsequently forced into sexual slavery.

Ahmed’s ordeal began at age 18, when IS’ army rolled into her native village of Kocho, thwarting her family’s attempt to seek refuge in the surrounding mountains. The village population was promptly split between the men, driven to an unknown fate, and the women and children, rounded up in a nearby school before being forced aboard trucks heading to neighboring Syria. Months of captivity in the most extreme conditions ensued before she was finally sold—alongside Navine, a friend met in captivity, and her nephew, Eivan, who she pretended was her son—to al-Amriki, an American citizen–turned-emir, a high-ranking position in IS’ military hierarchy. In a succession of fortunate circumstances and bold decisions, the trio managed to escape, first from the compound where they were held captive, and then from Syria toward a Turkish refugee camp. Ahmed, reunited with what was left of her family, attempted to heal her wounds and rebuild her life. The first-person narration provides important context for those unfamiliar with the Ezidi. Readers will find it hard not to empathize and be moved by Ahmed’s heart-wrenching ordeal and will likely forgive some of the book’s naïve essentialisms, plot holes, and unfortunate Eurocentrisms.

A grim but worthy read.