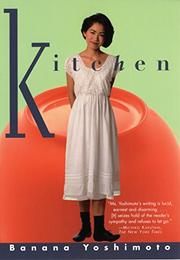 Young writer Yoshimoto's first full-length fiction to appear in the US--an excerpt of which appeared in New Japanese Voices (1991; ed. by Helen Mitsios)--explores love and loss with a distinctly contemporary sensibility. The source of what has been described as ""Bananamania"" in her native Japan, Yoshimoto combines traditional sensitivity to nuance and setting with a youthful sense of belonging to a wider, leas specifically Japanese world--characters jog, eat Kentucky Fried chicken, and listen to American music: a combination that, apparently, made this novel--in reality two separate stories united by a theme of loss and survival--an instant success among younger Japanese. In the story of the title, the narrator Mikage has lost her last remaining relative, a beloved grandmother with whom she lived. Grieving, she finds comfort only in the apartment kitchen--""the hum of the refrigerator kept me from thinking of my loneliness."" An invitation by Yuichi, a fellow student and friend of her grandmother's, to move in temporarily with him and his mother, Eriko, is gladly accepted. Mikage, who declares she loves kitchens best--they are to her symbol of life and survival--falls immediately in love with the new kitchen. Generous and glamorous Eriko, actually a transvestite--she was Yuichi's father--makes her feel at home, and Mikage, a survivor, is soon on her feet with her own apartment and a job, cooking for a TV show. But when Eriko is murdered, Mileage is there with an effective mix of common sense and love to help the grieving Yuichi recover. The second (much shorter) story, ""Moonlight Shadow,"" lyrically describes the journey that a young woman and man--who've both lost their beloveds in an accident--make from debilitating grief through an almost dreamlike landscape in which the dead appear to an acceptance that life, a ""flowing river,"" must go on. Timeless emotions, elegantly evoked with impressive originality and strength.