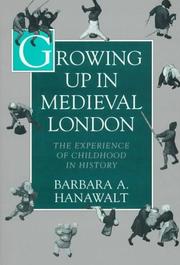 GROWING UP IN MEDIEVAL LONDON

The Experience of Childhood in History

by Barbara A. Hanawalt

In a densely informative, fluid, and often charming study, Hanawalt (History/University of Minnesota) dashes the widely accepted notions that medieval society lacked the concepts of childhood and adolescence as we understand them, and that it disallowed the cultural space for the expression of these states of development. Received wisdom has long dictated that in the brutal world of the ``Dark Ages,'' high rates of infant and child mortality hardened hearts to the young, and that society thrust adulthood upon children as soon as they were large enough to complete a day's hard labor. Turning to the rich court documentation available in London (coroners' rolls; wills and bequests; records of orphans; business disputes, etc.) and relying on a technique that includes ``fictional'' portraits and scenarios to illustrate her more conventional expository narrative, Hanawalt paints a convincing picture of a 14th- and 15th-century London in which parents cherished their children no less than we do. In the author's London, people felt responsible for the welfare of neighborhood children, often risking their lives in their defense; upwardly mobile parents took immense pride in a well-schooled son; and those charged with the care of orphans were monitored to ensure that designated funds were not misspent. These were harsh times, of course, and both children and parents died with alarming frequency (though Hanawalt points out that the resulting prevalence of single-parent households and of stepfamilies formed through remarriage makes medieval society, in some ways, more like our own than not), but the author conclusively demonstrates that then, as now, kids were allowed to be kids. Exemplary scholarship that blends traditional, painstaking research with contemporary approaches and understandings. (Ten halftones)