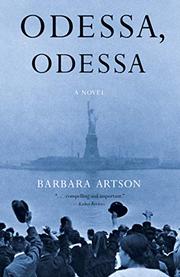 A debut novel spins the multigenerational saga of one family’s journey from a shtetl in the Eastern European pale to the streets of 20th-century New York.

Rebbe Mendel Kolopsky and his wife, Henya, work hard and fear God, but their life is a hard one. As the tale opens, Henya discovers she’s pregnant at a relatively advanced age. Months later, she fears for the lives of her new daughter, Marya, born deaf, and her six other children. The family’s troubles escalate rapidly when another pogrom sweeps through Odessa—hordes of Cossacks murder and rape many of Mendel and Henya’s neighbors (Artson effectively describes “the screams of women, the menace of barking dogs”). Mendel is beaten within an inch of his life. As the family finally resolves to brave the journey to America, and to attempt a new life in a strange land, readers also learn the story of Mendel’s brother Shimshon (later, in the U.S., Samson). Disowned by his father, Shimshon is a revolutionary who asks Mendel: “Where was your God each time the Cossacks came to call?” Years later, Mendel’s granddaughter discovers Samson’s journal, and readers are given an even fuller picture of a single family’s captivating multigenerational tale, from Odessa to Brighton Beach (“A nice place to live, enough food, no Cossacks knocking down the door”) to a family reunion in Tel Aviv, where Henya’s daughter learns the extent of another people’s oppression. Century-spanning books are notorious for perplexing readers; Artson has taken wise steps to forestall such confusion with a long list of character names and identities preceding the text and an informative addendum. Even so, keeping track of who’s thinking what can be tricky when the point of view shifts from one paragraph to the next. That said, the vivid events and rich details of the intricate story are compelling and important—immigrants like the Kolopskys helped make America into the land readers recognize today (Israel, too). Readers should understand more of their world at the end of this engrossing novel than they did when they began it.

A complex but rewarding epic of family ties, fading memories, and immigrants who—through hard work and luck—better the lives of their progeny.