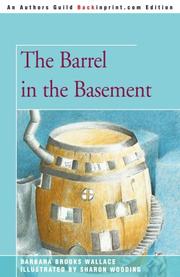 THE BARREL IN THE BASEMENT

Wallace, who transposed The Little Princess to San Francisco for Peppermints in the Parlor, has ransacked English fantasy literature for this second alliteratively-titled entry; but the premise has appeal, and to a point it's nimbly plotted. Pudding and Muddle are Furkens, one-time Elves who have become mouselike--furry, timid--basement-dwellers. Now homeless, the two come upon a small basement door, with a tiny brass mushroom doorknob; inside is a gruff elderly Furken, Old Toaster, who inhabits a snugly appointed barrel house, and doesn't want their company. As inquisitive young Pudding soon discovers, householder Noah believes in Elves--and Old Toaster, treated with humorous deference (an elfish home, elfish goodies) and party to scholarly confabs, likes the status quo. But with an assist from benign great Dane Thor, Pudding and Muddle are absorbed into the happy menage (their own green leather chairs and red leather slippers, etc.). Then Pudding, longing to be brave like the legendary forebears he hears about, asks for a sword. Noah departs on a business-visit to relatives who think him balmy, putting Thor in a kennel, and doesn't return on time. Pudding hears from renters that he's become sick--perhaps incarcerated, like the caged Thor! The renters' young nephew, Freddy, discovers Pudding--and Pudding, regaling him with Eft history (part of his campaign to prove he's not a mouse), rediscovers how to disappear: ""It's simple. You just have to be proud you're a Furken instead of wishing you weren't one!"" That bit of soppy self-esteem psychology is hardly the stuff of which heroes are made--at book's end, Pudding is off to rescue Noah and Thor--but there's considerable involvement and diversion en route. And, of course, a sequel in view. JLG.