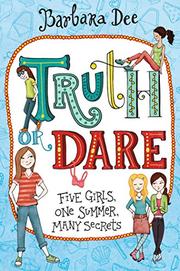 Like her peers, Lia spends ample time with her friends, but her circle is dominated by Abi, who enjoys humiliating them. Jules is Abi’s personal flunky, never trying to fight back. Athletic Mak has the wherewithal to find other friends but takes the path of least resistance (and as biracial Korean/African-American, she’s the only one identified as a person of color). Marley lives on the edge of the group, glued to them through Lia, who hasn’t thought too hard about her dysfunctional pals. Although all but Marley plan to attend summer camp, at the last moment Lia, embarrassed by her mortifying lack of progress toward puberty, backs out and goes to visit her mother’s oddball sister, Shelby, in Maine. When she returns, the campers have bonded through a demeaning game, “Truth or Dare.” Lia chooses truth, then lies repeatedly about her summer experiences. Plagued by Abi’s bullying, the group begins to splinter apart. Aunt Shelby intervenes, with unexpected results. Although the characters are archetypal, they’re well enough rounded to add excruciating reality and believably illustrate one of the many forms of bullying. Lia’s problems ring fully true, and her eventually learned life lessons are timeless.

Entertaining bibliotherapy but also a useful road map to resolution of the age-old problem of severe cattiness.