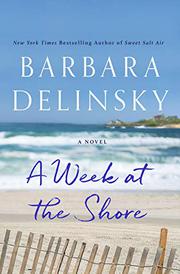 A WEEK AT THE SHORE

A middle-aged woman returns to her childhood home to care for her ailing father, confronting many painful secrets from her past.

When Mallory Aldiss gets a call from a long-ago boyfriend telling her that her elderly father has been gallivanting around town with a gun in his hand, Mallory decides it’s time to return to the small Rhode Island town that she’s been avoiding for more than a decade. Mallory’s precocious 13-year-old daughter, Joy, is thrilled that she'll get to meet her grandfather at long last, and an aunt, too, and she'll finally see the place where her mother grew up. When they arrive in Bay Bluff, it’s barely a few hours before Mallory bumps into her old flame, Jack, the only man she’s ever really loved. Gone is the rebellious young person she remembers, and in his place stands a compassionate, accomplished adult. As they try to reconnect, Mallory realizes that the same obstacle that pushed them apart decades earlier is still standing in their way: Jack blames Mallory’s father for his mother’s death. No one knows exactly how Jack’s mother died, but Jack thinks a love affair between her and Mallory’s father had something to do with it. As Jack and Mallory chase down answers, Mallory also tries to repair her rocky relationships with her two sisters and determine why her father has always been so hard on her. Told entirely from Mallory’s perspective, the novel has a haunting, nostalgic quality. Despite the complex and overlapping layers to the history of Bay Bluff and its inhabitants, the book at times trudges too slowly through Mallory’s meanderings down Memory Lane. Even so, Delinsky sometimes manages to pick up the pace, and in those moments the beauty and nuance of this complicated family tale shine through. Readers who don’t mind skimming past details that do little to advance the plot may find that the juicier nuggets and realistically rendered human connections are worth the effort.

A touching family drama that effectively explores the negative impact of stress on fragile relationships.