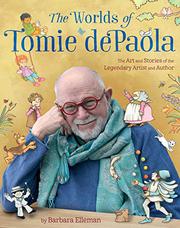 THE WORLDS OF TOMIE DEPAOLA

The Art and Stories of the Legendary Artist and Author

An illuminating, lavishly illustrated tribute to the works and talents of an iconic writer and illustrator, revised and updated in the wake of his death in March 2020.

Elleman adds books and illustrations published after her 1999 critical work, Tomie dePaola: His Art and His Stories, and reworks some of the original edition’s topical chapters, further buffing her already-lapidary analyses of how and why dePaola’s art works so well with the plethora of texts he illustrated and/or wrote over his long career. Playing to her strengths as an unexcelled observer and describer of picture-book art, she captures both visual and emotional ebbs and flows in dozens of works while raising critical points, such as complaints that too many of his pictures look alike, only so she can demolish them with barrages of counterexamples and well-chosen images of pages, page turns, and full spreads. Though dePaola is perhaps best known for drawing on his own background for authentic evocations of Italian and Italian American culture, Elleman commends his portrayals of diverse racial and ethnic characters in such works as his volume of Mother Goose rhymes. Sample pages of a picture book from first draft to finished layout present a revealing case study in his process, and an extended closing album of his “non-book” paintings offers convincing evidence of both his versatility and a distinctive style that shines through no matter the medium or subject. Specific biographical details are limited, but as Trina Schart Hyman writes in her introductory tribute (present in both this and the 1999 work), “the artist always draws or paints him- or herself, no matter what the subject and no matter what or how the approach.” Even devoted fans will come away knowing and liking dePaola more.

An essential guide to the legacy of a well- and deservedly loved artist.