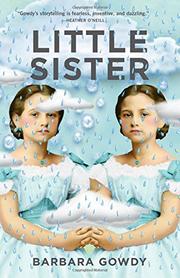 The electrifying story of a cinema owner who finds herself living another woman’s life whenever it storms.

Something strange is happening to Rose Bowan, a woman in her mid-30s who, with her mother, runs the old Toronto repertory movie theater they inherited from Rose’s father. Every time a thunderstorm rolls in Rose finds herself transported into the body of another woman, a “small, kinetic” book editor named Harriet Smith, who Rose quickly ascertains is having an affair with a ruggedly sexy married man with whom she works. Harriet’s moodily dramatic, mildly dangerous life could not be more different from Rose’s. Rose lives with her mother, whose symptoms of dementia are rapidly increasing, and has been dating the same unexciting boyfriend for years, a shorter-than-she-is meteorologist with a lazy eye who is 10 years Rose's senior and resembles the singer Paul Simon. Gowdy (Helpless, 2007, etc.) describes Victor as “much the same” as Rose in that he's “a serious, steady person, a person of strict routines.” But Rose’s equilibrium is completely upset by her recurring episodes, and she finds herself drawn not only to them, but to searching for Harriet outside of them as well. What’s going on? Are Rose’s out-of-body (and into another) episodes a side effect of “silent migraines,” as Victor posits? Are they extremely and eerily vivid dreams? Or are they something harder to explain? And what, if anything, do Rose’s episodes have to do with the childhood death of her younger sister, Ava? Gowdy sucks readers into this suspenseful, supernatural story like a strong wind in a squall. We are right there with Rose as she tries to piece together her disconnected experiences as Harriet into a cohesive picture and to take action on Harriet’s behalf. Ultimately, the episodes lead Rose to more clearly understand her own experiences and to act on her own behalf as well.

This imaginative, alluring novel from an acclaimed Canadian author unspools steadily and grippingly and may earn Gowdy many new fans stateside.