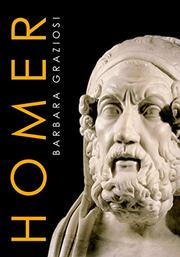 Graziosi (Classics/Durham Univ.; The Gods of Olympus: A History, 2014, etc.) delivers an excellent guide, rendered with both academic rigor and clarity, to understanding the Iliad and the Odyssey as well as their putative author.

Translated into almost every modern language, these epic poems are cornerstones of the Western literary canon. Homer wrote about Greece's remote past, even for ancient audiences, some of whom regarded these seminal stories as the work of multiple poets, drawn from oral compositions, recomposed again and again in performance and interpreted in manifest ways. Today, Homer is almost as elusive as his character Odysseus—and perhaps as mythical. Herodotus notwithstanding, scholars of classical Greece revered Homer but had no evidence he actually existed. As for modern readers (and viewers), Graziosi points out that most encounter the poems—especially the Odyssey—through other works in varied media rather than by reading the “originals,” themselves subject to millennia of editing. In the end, Graziosi concludes, as did Nietzsche, that Homer's authorship is an aesthetic judgment, not a fact, and that the epics likely were of both oral and written origin. But this debate takes a back seat to her lively observations on the works, their brilliant insights on humanity. and their numerous contradictions. Graziosi's analyses of the literary, linguistic, historical, cultural, and archaeological issues surrounding the poems—not least the “artificial” language of Homeric Greek—are remarkable feats of compression, succinct yet richly detailed. From the existential quality of the Iliad to Odysseus' journey to the Underworld (and how it inspired Dante) to the parallels between Achilles and the Babylonian hero Gilgamesh, this slender volume is fluidly written, provocative, and persuasive.

A highly accessible book infused with sharp considerations of the “first teacher” of Greece and of the epics' enduring power, provenance, and influence not only on antiquity and the Middle Ages, but on the modern world.