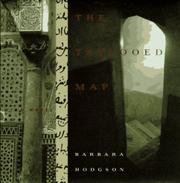 Newcomer Hodgson weighs into the illustrated novel/journal genre, † la Nick Bantock's Sabine trilogy, with a multimedia tale of mystery, magic, and travel in North America crammed full of maps, pictures, old postcards, and magazine cuttings. Lydia, a researcher, and Chris, an antiques buyer and her former lover, set off on a six-month trip, starting in North Africa. Lydia, compulsive in her early journal entries, is soon overtaken by the hypnotic beauty of Morocco and vividly evokes the wondrous chaos of the markets, the exotic odors wafting on warm breezes, the intricacies of the ancient architecture. Her composure is eroded when, first in Tangier and later in Fez, she spies, watching her from across various cafes, the same handsome and mysterious man she saw in Morocco. While in Tangier, Lydia awakes one morning to find a cluster of flea bites on her wristmarks that gradually reveal themselves to be a tattoo forming a map running the length of her arm. She then finds and begins to follow a 1943 guidebook to Morocco. After she disappears, Chris reads her journal and soon uses it to record his own thoughts. He also meets, he thinks, the family of the handsome man Lydia claimed to have met; but unable to track her down after three weeks, he goes back home and reads through the same material Lydia had read before their trip. Realization dawning on him and now ensnared in the same mysterious world as Lydia, he returns to Morocco to find herwherever she may exist. Artistically less enthralling than Sabine, and a little too mysterious for its own good, but, still, it leaves a reader hungry for a follow-up: It's captivating but begs a better, or at least further, revelation of its secrets. (Over 65 color and 68 b&w illustrations)