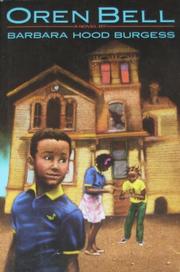 An offbeat story introduces Oren, 12, the only boy in an African-American family consisting of his mother, his overbearing, overachieving twin Latonya, and younger sister Brenda, who is both brilliant and mildly psychic. They live in a neglected neighborhood under a Detroit freeway. Oren's chief duty as the new school year begins is to take away the curse on the abandoned house next door; after he cheats during the ceremony, he's sure the year's bad luck is his fault: their school closes; their grandfather is hospitalized; Oren's friend is murdered in the house; his mother loses her job and meets a man who seems determined to take Oren's place as man of the family. But by the close, Oren realizes that not all of the luck was necessarily bad—nor was it caused by a simple ceremony. Burgess's voice is original and witty. Her narrative may be episodic, even slow, but it is also consistently full of sharply realized details and interesting characterizations. A promising debut. (Fiction. 10-14)