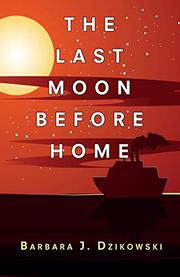 THE LAST MOON BEFORE HOME

From the Moon Trilogy series, volume 2

This sequel revisits a troubled family as it wrestles with love in all its beautiful and terrible forms.

The novel begins in 1973. Noël Trudeau, ex-wife of Leon Ziemny, is pregnant. Against her doctor’s dire warning, she gives birth to a daughter, Willow, and dies. Fast-forward to the late ’90s. Armed with her mother’s diary, Willow is determined to probe her past. She embarks on a trip that takes her to her mother’s grave in Willow, Ohio, and then to the Ziemnys, still in the steel town of Langston, Indiana. Old Walt Ziemny is in the early stages of Alzheimer’s, but the disease soon starts moving fast. His son Ricky, an artist, never married after Noël wed Leon instead of him. That union imploded, and Leon and his second wife, Stella, have, for over 25 years, been in a marriage that died long ago. Then Willow shows up, claiming that Noël was her aunt while she tries to figure things out, test the waters. Slowly, she becomes accepted even if she is still a mystery. Eventually, an important family secret is revealed. Like the author’s previous novel, The Moonstoners (2019),this second volume of a trilogy shows Dzikowski to be a very sensitive observer and writer. Even though the old Polish neighborhood in Langston is changing, the author paints a loving picture of the area, anchored by the parish church and Walt’s tavern, the Mazurka Inn. There are no missteps here, and there are wonderful character studies, especially of Walt and Leon. Walt was the only one to accept Noël from the get-go. Now, his Alzheimer’s is painful for the whole family (and clearly Dzikowski knows a lot about the condition). Leon has always been locked up tight, pushing people away, and readers will want to scream at him, shake him. Willow could be his salvation. He ultimately begins a new life—a better life for a better man. Because everything has been so hard won, the final peace is all the sweeter. Readers will be eagerly awaiting the author’s next installment.

A complex and engrossing family tale with strong characters.