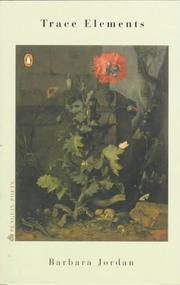 A previous winner of the Barnard Prize, and currently an English prof (the University of Rochester), Jordan offers a second volume (after Channel, 1990) that’s serious and somber and relies on an intellectually compelling dialectic of the abstract and the natural. Jordan’s unsettling metaphysics leads to abrupt line shifts and edgy phrases: Her poems —begin with debris——the —trace elements— of the title—and end wondering what the difference is —between trash and keepsake.— —The known, referential world— is simply —a hall of exits— (—Dinosaur Calendar—); and Roman ruins, the shells in Goethe’s house, animal remains—all yield no meaning, just an —indifference of things.— Many of the weary poems here record the world after the Fall, the loss of faith and certainty; and imagine a prelapsarian idyll before knowledge and perspective differentiated objects with names (—Anchorites—). Poems such as —The Cult of Solitude— and —Spectrum— announce Jordan’s loneliness and escape from the world, her admiration for a contemplative life in which ’silence widens into exile.— —Keeping vigil with discontent,— Jordan pierces the —veil of debris— (—O—) in poems that are always smart, and sometimes prophetic.