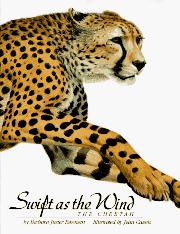 SWIFT AS THE WIND

Another fine science title from the author of Tiger with Wings (1991), focusing on the cheetah, the swiftest animal on earth. Esbensen points out that, despite the cheetah's speed and expertise as a solitary hunter, its survival as a species is severely endangered due to larger predators like lions (who both compete for prey and kill cheetah cubs), dwindling habitat, and its own impoverished gene pool. The author also describes the specialized anatomy that helps the cheetah's bursts of great speed, including oversized internal organs, claws that never retract, long legs, and a springy backbone. The straightforward text follows the cheetah as it hunts on the African plains and cares for its young. Cassels employs a sandy palette, heightened by rich gold, tan, and black accents—the colors of the cheetahs themselves. Especially appealing are the many close-ups of fuzzy cubs and the dramatic jacket painting of a cheetah at full gallop. (Picture book/nonfiction. 8-12)