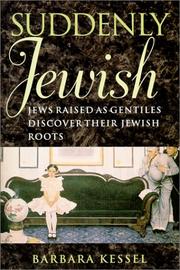 In the latest entry in the excellent Brandeis Series in American Jewish History, Culture and Life, Kessel (Director of Administration/Board of Jewish Education) talks to over 160 men and women who uncovered a family secret of identity-shaking proportions.

In recent years, the stories of children hidden during the Holocaust and families that submerged their Judaism under a welter of subterfuges have become as common as self-help books (albeit considerably more interesting reading). Kessel attempts to find some larger perspective on this phenomenon by surveying the experiences of a large sampling of adults who discovered at some point that their ostensibly non-Jewish families were, in fact, Jewish. For some, this revelation came as a shattering blow to their self-image and identity; for others, it served to confirm suspicions long held in private, allowing them fully to embrace a world to which they had always been drawn. Kessel divides her subjects into three groups: the all-too-familiar categories of hidden children of Holocaust survivors, Jewish children who were adopted by non-Jews, and the crypto-Jews who descended from the victims of the Inquisition and forcible conversion. Although the chapter on the crypto-Jews is fascinating, this group sticks out from the rest of her narrative uneasily, with a distinct identity and set of problems that seems shoe-horned into this slender volume to fill it out to book length. Much of the story consists of transcripts of Kessel’s interviews, and she is fortunate in her subjects: they are uniformly thoughtful, articulate, and sensitive. So is the author herself, with the result that this is a compelling account to read even when it seems a bit unfocussed in its larger perspectives.

Despite a certain fuzziness in its conclusions, a powerful collection of personal testimonies.