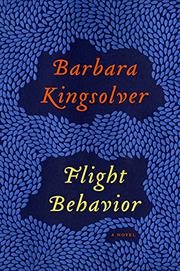 At 17, English honor student Dellarobia thought she would escape a future of grim rural poverty by attending college. Instead, she got pregnant and married. Now 27, feeling stifled by the responsibility of two young children she loves and a husband she tolerates, Dellarobia is heading to her first adulterous tryst when she happens upon a forested valley taken over by a host of brilliant orange butterflies that appear at first like a silent fire. She skips the tryst, but her life changes in unexpected ways. Soon after, Dellarobia leads her sweet if dim husband, Cub, to the butterflies, and they become public knowledge. The butterflies have landed in Tennessee because their usual winter habitat in Mexico has been flooded out. The local church congregation, including Dellarobia’s mother-in-law, Hester, embraces the butterflies’ arrival as a sign of grace. Influenced by her beloved preacher, usually antagonistic Hester (a refreshingly complex character) becomes a surprising ally in convincing Dellarobia’s father-in-law not to cut down the forest for much-needed cash, although she is not above charging tourists, who arrive in increasing numbers to view the spectacle. Soon, a handsome black scientist with a Caribbean accent has set up in her barn to study the beautiful phenomena, which he says may spell environmental doom. Dellarobia is attracted to the sophisticated, educated world Dr. Byron and his grad school assistants represent. When she takes a job working with the scientists, the schisms in her already troubled marriage deepen. Yet, she is fiercely defensive against signs of condescension toward her family and neighbors; she really goes after a guy whose list of ways to lower the carbon footprint—“bring your own Tupperware to a restaurant,” “fly less”—have no relevance to people trying to survive economically day-by-day.

One of Kingsolver’s better efforts at preaching her politics and pulling heartstrings at the same time.