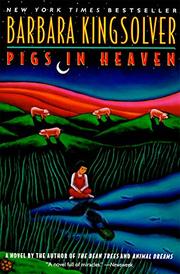 For what's hoped to be a "break-out book," a greatly gifted storyteller returns to the characters and settings of her celebrated first novel (The Bean Trees, 1987). Kingsolver previously tracked plucky ex-Kentuckian Taylor Greer as she made her way west to Tucson, struggling to earn a living and to deal with the frightened, wounded toddler Turtle, who had been abandoned in Taylor's care in Oklahoma. Now it's three years later. Settled Tucsoners Taylor and Turtle are on vacation at the Hoover Dam when six-year-old Turtle witnesses an accident—a retarded man has fallen into a spillway. When the man is rescued, Turtle becomes a celebrity—which brings self-confidence but also the attention of Cherokee Nation authorities in Heaven, Oklahoma- -especially that of Indian-activist lawyer Annawake Fourkiller, who recognizes Turtle as a missing Cherokee child called Lacey Stillwater; Lacey, it turns out, is the daughter of a deceased Cherokee woman whose alcoholic sister's abusive boyfriend broke both of Turtle's arms before the sister and boyfriend ditched her and disappeared. When Fourkiller pays an ominous visit to Taylor, whose adoption of Turtle may have been illegal, Taylor packs up the child and goes on the lam. As their flight becomes more punishing, Turtle regresses severely. Meanwhile, Taylor's spirited mother Alice Greer, remembering she has a Cherokee cousin in the town of Heaven, pays a visit, snoops around, and falls in love—with Cash Stillwater, Lacey/Turtle's grandfather and only living relative. Soon Taylor (no mother, not even those in the Indian myth of the odd title, is more loving) shows up to spare Turtle the trials of flight. All will be amicably, hilariously, and heartwarmingly settled to everybody's satisfaction. Not the truly wonderful book it might have been—characters who seem important disappear; carefully marked trails turn out to be merely picaresque, leading nowhere—but a terrific read nonetheless.