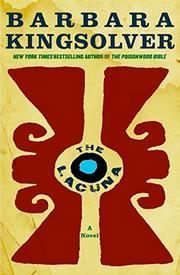 Set in leftist Mexico in the 1930s and the United States in the ’40s and ’50s, the novel is a compilation of diary entries, newspaper clippings (real and fictional), snippets of memoirs, letters and archivist’s commentary, all concerning Harrison Shepherd. In 1929, Harrison’s Mexican-born mother deserts his American father, a government bureaucrat, and drags 11-year-old Harrison back to Mexico to live with her rich lover on a remote island. There Harrison discovers his first lacuna, an underwater cave that leads to a secret pool. As his mother moves from man to man, Harrison learns to fend for himself. His disastrous two-year stint at boarding school back in America is marked by his awakening homosexuality (left vague thanks to the lacuna of a missing diary) and his witnessing of the Hoover administration’s violent reaction to a riot of World War I homeless vets. In 1935, Harrison returns to Mexico, where he becomes first a lowly but beloved member of the Diego Rivera/Frida Kahlo household, then secretary to Leon Trotsky until Trotsky’s assassination. Kingsolver is at her best in the pages brimming with the seductive energy of ’30s Mexico: its colors, tastes, smells, the high drama of Trotsky and Kahlo, but also the ordinary lives of peasants and the working poor. When Harrison returns to the States, however, the novel wilts. His character never evolves, and the dialogue grows increasingly polemic as his story becomes a case study of the postwar anticommunist witch-hunt. Harrison moves to Asheville, N.C., writes fabulously popular novels about ancient Mexico, hires as his secretary a widow whom the reader knows already as his archivist, and is then hounded out of the country by the House Un-American Activities Committee, with fateful results.

A richly satisfying portrait of Mexico gives way to a preachy, padded and predictable chronicle of Red Scare America.