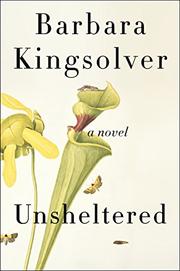 Alternating between two centuries, Kingsolver (Flight Behavior, 2012, etc.) examines the personal and social shocks that ensue when people’s assumptions about the world and their place in it are challenged.

The magazine Willa Knox worked for went broke, and so did the college where her husband, Iano, had tenure, destroying the market value of their Virginia home, which stood on college land. They should be grateful to have inherited a house in Vineland, New Jersey, just a half-hour commute from Iano’s new, non-tenured one-year gig, except it’s falling apart, and they have been abruptly saddled with son Zeke’s infant after his girlfriend commits suicide. In the same town during Ulysses Grant’s presidency, science teacher Thatcher Greenwood is also grappling with a house he can’t afford to repair as well as a headmaster hostile to his wish to discuss Darwin’s theory of evolution with his students and a young wife interested only in social climbing. While Willa strives to understand how her comfortable middle-class life could have vanished overnight, her 26-year-old daughter, Tig, matter-of-factly sees both her mother’s disbelief and her Greek-immigrant grandfather Nick’s racist diatribes and hearty approval of presidential candidate Donald Trump as symptoms of a dying culture of entitlement and unbridled consumption. Lest this all sound schematic, Kingsolver has enfolded her political themes in two dramas of family conflict with full-bodied characters, including Mary Treat, a real-life 19th-century biologist enlisted here as the fictional friend and intellectual support of beleaguered Thatcher. Sexy, mildly feckless Iano and Thatcher’s feisty sister-in-law, Polly, are particularly well-drawn subsidiary figures, and Willa’s doubts and confusion make her the appealing center of the 21st-century story. The paired conclusions, although hardly cheerful, see hope in the indomitable human instinct for survival. Nonetheless, the words that haunt are Tig’s judgment on blinkered America: “All the rules have changed and it’s hard to watch people keep carrying on just the same, like it’s business as usual.”

As always, Kingsolver gives readers plenty to think about. Her warm humanism coupled with an unabashed point of view make her a fine 21st-century exponent of the honorable tradition of politically engaged fiction.