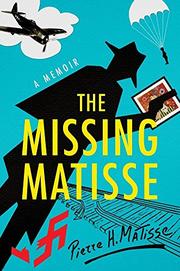 The grandson of artist Henri Matisse (1869-1954) recalls his adolescence in Nazi-occupied France.

Most of Matisse’s debut memoir focuses on his experiences during World War II, when he abetted his father’s underground missions; attended schools where he suffered from lice, bullies, and censorious administrators; and nearly starved on meager food rations. In Paris, he sometimes got vitamin cookies from the Red Cross, donated by American Quakers. His clothing was “a hodgepodge of hand-me-downs” that he quickly outgrew. For the most part, the author captures his teenage voice and perspective, imbuing the memoir with the tone of a picaresque novel. He portrays himself as daring, sassy, and curious. His curiosity makes all the more unbelievable the mystery at the heart of the book: the missing Matisse of the title, it turns out, is not one of his grandfather’s paintings but the author’s identity. When he was 12, before enrolling him in a boarding school, his mother told him that he was to be known by another surname, not Matisse, adding no explanation. Nor did the author ask about this sudden change even though he forthrightly asked about much else. He wondered if he was really the son of the man he called Papa, whom he respected and loved. After the vivid chapters that take place during the war, the narrative loses momentum. While living in Normandy, Matisse learned that his parents divorced, which shocked him, but his mother offered little explanation. A few weeks later he got word that his mother was dying, destitute, in a run-down hospital, an incredible fate for the daughter-in-law of France’s most famous artist. But again, there was no explanation. Inexplicably estranged from his once-adored Papa, Matisse, married, moved to Canada and later the United States. He divorced three times and finally met the love of his life.

A candid portrayal of wartime privations is followed by a blur of unexamined events.

A GOOD PLACE TO HIDE
by Peter Grose
Nonfiction