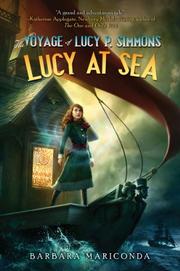 From the Voyage of Lucy P. Simmons series, volume 2

The adventure continues for Lucy as she searches for family members, a family fortune and a family curse.

When The Voyage of Lucy P. Simmons (2012) concluded, Lucy’s seaside home in Maine had been transformed into a sailing vessel. Now, with the mysterious Marni, housekeeper Addie and three children fleeing an abusive father, she sets sail for Australia. Hopefully, she can locate a long-lost aunt and learn why the family has been cursed. Marni arranges for a crew which consists of a typical assortment of characters, including two from the Caribbean who practice voodoo. Magic was an important player in the first volume, but it takes center stage here in the second. Storms brew and dissolve by way of magic as a spectral ship appears and disappears. A deck of cards magically provides clues to Lucy’s family history and a surprise relative. A flute magically plays notes that help Lucy work out the combination to her father’s safe. Mariconda still provides highly visual settings, but she relies on magic too heavily, letting supernatural forces control the voyage in place of character development or actual navigation. A breathless run of events concludes the tale, which could be tied up in a final installment.

Lucy’s fans and fans of magic will enjoy the trip.