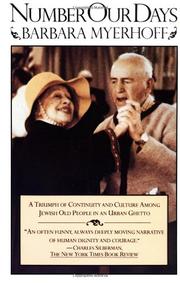 He that would avoid old age must hang himself in youth,"" the Yiddish proverb goes, but for the vital, feisty corps at the Aliyah Senior Citizens' Center in Venice, California, old age is a time of continued learning and adaptation. ""So what do you want from us?"" ""Are you Jewish?"" they asked USC anthropologist Barbara Myerhoff, and at the outset her answers were tentative. Was it anthropology or a personal quest? After all, one day she too would be a little old Jewish lady. Myerhoff spent more than four years listening to bobbemyseh (grandmothers' tales), interviewing more than 30 regulars (the others grew jealous), and observing the generally ""tumultuous"" Center social life, its ""definitional ceremonies,"" private rituals, and ongoing squabbles. These old Jews are, by and large, immigrants whose children have assimilated and left them; always socially committed, they pride themselves now on their continued independence and activism (many raise funds for Israel) but regret the paradox that America's religious freedom has meant a loss of sacred traditions. The women, a majority, have fared better in old age--the anthropologist supplies the reasons why in an attractive, accessible manner that recalls Margaret Mead. Storytelling is a passion, arguing an art; forgetting a word becomes, according to Schmuel the tailor, ""a special torture designed for old Jews."" And it is through their words that Myerhoff documents the world views of the people who call her ""Barbara dolly."" Like no-nonsense Basha, who says of her first visit to a hairdresser: ""A dressed-up potato is still a potato."" Or Jake who recalls Old World curses: ""May you inherit a hotel with one hundred rooms and be found dead in every one."" Or Schmuel, gadfly and maverick, a worthy adversary to the last, who challenges her regularly: ""If I would be like him, who would be like me?"" Myerhoff's first book, Peyote Hunt, was nominated for an NBA. This exemplary new work, parts of which made a winning documentary, should find an even larger, more admiring audience.