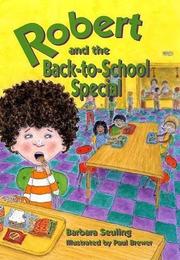 ROBERT AND THE BACK-TO-SCHOOL SPECIAL

School is back in session for Robert Dorfman and his friends. Some things are the same as ever. Mrs. Bernthal is their teacher again and the same friends who have made this series so delightful are back as well. Robert is growing older and is becoming a little more sensitive about his looks, especially his amazingly curly, thick hair. When a girl in his class says he looks “different,” he frets about it. Robert decides he can’t wait for a haircut at the barbershop and talks his best friend, Paul, into clipping his hair. When his brother Charlie tries to fix the cut, the result is a lopsided short-and-long style. Brewer’s illustrations perfectly reflect both the hilarity and poignancy as Robert is forced to face the world with a “lumpy and bumpy” hairstyle. Robert still lacks the confidence he desires, and readers will identify with the small worries that plague him as he makes his way through the trials of growing up. Will people make fun of his hair? Will his Halloween party be a success? Will his friends think his father is weird when they see how he dresses and acts on Halloween? His warm but realistic family and down-to-earth teacher are there for him as he faces these challenges. Though Robert might characterize himself as strictly average, young readers will identify with and root for him at every turn. The cartoon illustrations add to the tight plot and realistic situations. Readers will be waiting for his further adventures. (Fiction. 7-10)