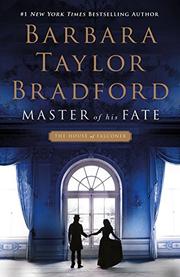 MASTER OF HIS FATE

The launch of what promises to be another blockbuster Bradford series.

Putting aside her Downton Abbey homage (Secrets of Cavendon, 2017, etc.), Bradford returns to her roots chronicling retail dynasties like the Harte family of A Woman of Substance (1979). Readers be warned: The opening volume of The House of Falconer saga appears to be an extended prologue. Replete with opulent décor, beautiful but unassuming rich people, and homey scenes, the narrative is untroubled by the jeopardy this genre demands. A few exceptions: In 1884, 14-year-old James Lionel Falconer, future founder of what is sure to be the Falconer mercantile empire, suffers chest pains while pushing a wheelbarrow near his father’s stall at Malvern Market. His mother, Maude, is afflicted with a cold which could become pneumonia. However, since no outcome ensues for either ailment, we can only assume this is foreshadowing for future novels. When James, now 17, and a friend are set upon by thugs and badly beaten, the police and family suspect a targeted attack, but this loose end is also left dangling. Sent to the port city of Hull, James advances in an uncle’s shipping company and is seduced by an older and cooperatively unclingy widow. James states he “prefer[s] older women”—which bodes well for his future, spoiler alert, liaisons. Meanwhile, Alexis, 25, the auburn-tressed daughter of commercial real estate kingpin Henry Malvern, falls in mutual love at first sight with Sebastian Trevalian, a widowed banker 15 years her senior. Their families approve (including Sebastian’s daughter Claudia, Alexis’ friend), and money is no problem; something has to go wrong, but large swaths of genteel gloating must be endured before it does. As one forgives a dear friend who tends to blather on, readers may tolerate Bradford’s pedestrian, repetitious prose and even enjoy this leisurely stroll through Victorian times, contenting themselves with occasional celebrity references: Doctor Freud, Jack the Ripper, Crown Prince Bertie, among others. The good characters are unambiguously and tediously good, and no believable antagonist arises to create conflict.

A slow-paced, complacent introduction to the excitement to come—we hope!