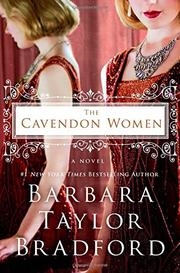 Most of the major Downton characters, both downstairs and upstairs, have their counterparts in Bradford’s saga of the Inghams, who are striving to maintain their stately home after World War I, when, as Downton viewers know, the British government imposed punishing taxes on the aristocracy. Charles Ingham, the sixth Earl of Mowbray, has not lost the family fortune to foolish investments, but he has married his true love, Charlotte, matriarch of the Swann family, which has served the Inghams for more than 300 years. Most of the family greets the news with sanguinity, including the Earl’s heir, Miles, and his four daughters, whose given names all start with D, a move which is intended to charm but mostly confuses. Even Lady Gwendolyn, the book’s crusty clone of the dowager countess of Grantham, approves the match—although the Swanns are commoners, they are not just any commoners. Only Aunt Lavinia complains and is ostracized by the family until, many pages later, the tragic reason for her snark attack is discovered. There are other token attempts to introduce excitement. One of the D daughters is being slandered at work over a long-ago lesbian entanglement (a problem soon mooted by her respectable betrothal), and the Earl’s ex-wife, Felicity, has absconded with the family jewels. Cecily Swann, a successful fashion entrepreneur in the vein of Bradford’s Emma Harte series, has resumed her affair with Miles even though his estranged wife, Clarissa, won’t divorce him—her obesity has removed her from the remarriage market. However, as if Bradford had no real desire to deal with unpleasantness and would prefer to wax rhapsodic about her favorite subjects—décor, money, and beautiful people—every possibility of interesting conflict is quickly dispatched. The family fortune is only briefly threatened. A desultory murder mystery involving peripheral characters and another of the D’s comes too late to leaven the dullness.

A novel that could have used more melodrama or even drama.