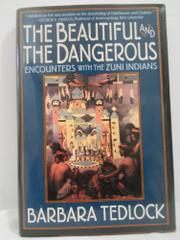 THE BEAUTIFUL AND THE DANGEROUS

Encounters with the Zuni Indians

Like a family album of lovingly collected snapshots, anecdotes, and clan lore, this study by Tedlock (Anthropology/SUNY at Buffalo) offers an affectionate and informative portrait of a contemporary Native American people, the Zuni of New Mexico. On her first visit, in the early 1970's, Tedlock, traveling with her new anthropologist-husband, ``fell in love with the beauty of the high desert and the native peoples of the American Southwest.'' This love affair soon turned into a scholarly study of the Zuni she met there, particularly the family of the patriarch Hapiya and his wife, Tola. Over the years, becoming an accepted member of Hapiya's family, Tedlock learned—as she listened to stories, attended festivals, and helped prepare special foods—how vital many of the old traditions still were. She observed such rituals as the sprinkling of cornmeal on animals and birds that had been killed, so that their journey to the village of the dead would be speedy; the propitiating of spirits with offerings of ears of corn; the butchering of deer; and the making of pottery with traditional tools and dyes. Tedlock made a special study of Zuni music—which, she says, is evolving new traditions, ``dancing the modern world into place, giving it meaning, order, perhaps even a sacred existence.'' But as exciting as the cultural discoveries have been, Tedlock also notes how, increasingly, the Zuni are living in a world in which much of the beauty of the old ways is challenged by the danger of the new. One of Hapiya's sons, a Vietnam vet and recovering alcoholic, has committed suicide; another family member has developed diabetes; and the viability of the old crafts is threatened by increasing costs and unscrupulous middlemen. Tedlock's personal but never sentimental approach vividly conveys the vitality and continuing role of Zuni traditions in the Southwest. A worthy if occasionally uneven contribution, then, to Native American studies. (Illustrations—b&w—throughout.)