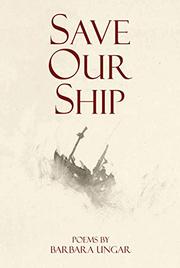 A collection of 57 poems that sound alarms about current ecological, political, and cultural trends.

Ungar (English/Coll. of Saint Rose; Immortal Medusa, 2015, etc.) provides helpful notes to explain her inspirations for this impressive volume of free verse, which includes transgressive female voices of the past and present; Cassandra, Emily Dickinson, and Audre Lorde make appearances. Alphabetical order is a recurring theme, as is Morse code. The title poem makes reference to rising, polluted seas; the placement of seven lines of “SOS” in Morse code seems to form waves. Environmental disasters are another urgent concern, as seen in “Endnotes to Coral Reefs” and “Naming the Animals,” a partial list of extinct species that ends with a gut punch: “Four species an hour.” Language is also under attack, as revealed in “Elegy,” which alphabetically lists words eliminated from the Oxford Junior Dictionary (“bluebell,” “buttercup”) and arrays them as if they’re drifting away. In contrast, newly included words (“blog,” “broadband”) are clustered in a solid block of text. Clever manipulation of language, space, and punctuation abounds. “Quoth the Queane” riffs on the letter Q, while “To You, U” explores the personal and linguistic history of Ungar’s initial. “Après Moi” offers 21 variations on the phrase “Let them eat cake”—with “cake” replaced by evocative signifiers, such as “bump stocks,” “the lying press,” “tax returns,” “opiates,” and “paper towels.” Dystopian poems will resonate with many readers, such as “The Woman With a Live Cockroach in her Skull” and its slippery preposition: “She wakes screaming / each morning at the news.” “Man Bun Ken” is a humorous meditation on the fate of the latest iteration of Barbie’s companion: “Future archaeologists / may stumble upon his simulacra / & mistake him for a shape-shifting god.” The book is full of keen insights regarding the passage of time, whether one is attending a wedding with one’s first boyfriend, taking a nostalgic walk through the West Village, or observing a spider and her web. Overall, Ungar suggests that language and memory are futile attempts to impose order on the chaos that surrounds us.

A distress call that’s worth reading and heeding.