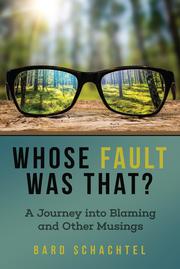 WHOSE FAULT WAS THAT?

A Journey into Blaming and Other Musings

An exploration of how people fall into patterns of blaming, and strategies for combating that tendency.

Finding fault in others for one’s problems might be a common behavior, but it’s not an unavoidable one, as debut author Schachtel demonstrates through his analysis of blaming behaviors. The cognitive behavioral therapist identifies “six constructs…that intensify blaming,” including “Look How Important I Am,” or exaggerated self-confidence; “Comparisons,” in which one blames others so that one can feel “successful”;  “Work Place Environment,” in which one is driven by a desire to appear competent; “Loss and Grief,” which can foster guilt and self-blame; “Let’s Pray About It,” in which one uses religion to find a culprit for negative outcomes; and “Maybe Later,” in which one avoids blame through procrastination. He also identifies four types of blamers; for example, the “calculating” type is ruthless about shifting responsibility onto others, while the “whatever” type passively assumes that other people will solve problems for them. The diagrams and illustrations here seem intended to elucidate the author’s concepts, but they sometimes create more confusion than clarity. More useful is Schachtel’s suggestion that readers keep a log of their own thoughts, in order to uncover one’s “attitudes, behavior, and excuses” related to shifting responsibility. Overall, the author is engaged in a noble project—to get people to stop blaming others and take back control of their own lives. But this slim effort, which is fewer than 200 pages long, doesn’t succeed at fully explaining why people are prone to such behavior. The intended audience also isn’t very clear, with some examples involving workplaces and others focusing on marriages.