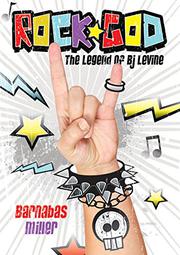 The Legend of B.J. Levine

Here’s a quick test to find out if this is your kind of book: “You blokes just happen to be on tour with Terry the Wünder-Dwarf and the Pirates of Munchausen!”

B.J. Levine has a small, black book. It’s called The Legend of the Good Supreme, and it’s an instruction manual on becoming a “full-on, fire-breathing MEGALORD OF RRRRROCK.” Because this is rock and roll, the book is missing all but six pages. So it doesn’t tell B.J. he’s going to meet a dwarf or be chased by elderly bikers. It just tells him his first step: Start a band. The story makes as much sense as your average Queen song, and it’s just as much fun. The logic doesn’t always track, chapters jump from first to third person without warning and some sentences go right off the rails: “He screamed like a little girl. Or not exactly like a little girl—more like some sort of frightened monkey. Like a frightened, heavy metal–singing monkey who’d stepped on a rusty nail.” But no one knows what a pompatus of love is, either, and the Steve Miller Band managed just fine.

This book teaches kids to spell “rock” with five Rs, and anyone who thinks that’s good advice will find it an excellent instruction manual for life.