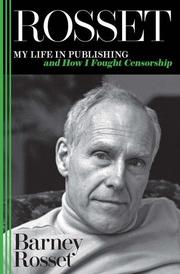 My Life in Publishing and How I Fought Censorship

Presented by the Rosset estate with a memoir that had been “pruned to death,” OR Books founder John Oakes, who worked at Grove in the 1980s, went back to the archives and added material that better represented the boss he describes as “either brooding, laughing, or raging.” That charismatic man practically leaps off the pages of these salty reminiscences, which begin with a tribute by Rosset to his gamekeeper-assassinating Irish great-grandfather and the assertion, “Rebellion runs in my family’s blood.” Young Barney’s radical tendencies were evident even before he wrote a paper on Henry Miller’s then-banned novel, Tropic of Cancer, at Swarthmore College in 1940. (He got a B-minus.) Tropic of Capricorn was one of several books, most famously Lady Chatterley’s Lover, that the maverick Rosset published and defended in court to challenge outmoded obscenity statutes still on the books in the 1950s. The resulting Supreme Court decisions opened the door to a more adult American culture, and Grove Press was at the forefront of putting it into print—and on film, with I Am Curious (Yellow), a 1967 Swedish movie that in Rosset’s assessment hardly deserved its scandalous reputation but certainly provided an income that supported Grove’s more literary and less lucrative offerings. Rosset’s commitment to keep his authors’ complete works in print meant that the profits from steady sellers like Waiting for Godot often got swallowed up by the costs of publishing Samuel Beckett’s fiction, for example. The court costs of the censorship cases kept Grove’s finances shaky and ultimately led to Rosset’s ill-advised sale of the company to British magnate George Weidenfeld and American heiress Ann Getty in 1985. Characteristically, Rosset follows up an acid depiction of his subsequent ouster with a tribute to Grove’s “Other Nobelist” (after Beckett), Kenzaburo Oe; for this fiery idealist, it was always about the writers.

Vivid and informative—a must for anyone interested in 20th-century American publishing and culture.