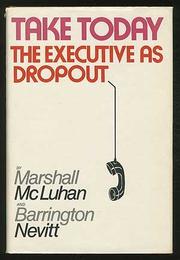 The Executive As Dropout

This paste-up of aphorisms, punditry, and Joycean puns takes a few cliches and splices them with McLuhanist motifs and updatings. "Brainstorming," the fad of the '50's; the hoary "managerial revolution" said to supersede old-fashioned profit criteria; the "end of ideology" cant — these are spruced up with day-glo reflections on the Cornfeld-conglomerate-bullish period whose demise the authors conveniently overlook. If taken seriously, the book is insulting in its illiterate — oops, grating — references to Keynes and its "post-industrial" platitudes: electronics has made specialization and efficiency obsolete; employer and employee "merge as audience"; data-processing erases blue-white collar distinctions; money "as such" has become "information only"; and (for those curious about the subtitle) "aware executives" will become generalists. The hyperbole would be forgivable if it didn't exaggerate stale misconceptions about prosperity and automation and cybernation ending social conflict and the survival-oriented way of life for business and labor — i.e. the American sociological orthodoxy of the '50's and early '60's. This is only worth noting because McLuhanism is considered somehow essentially avant-garde, though of course its trendy bloom has faded. In fact, it has elements of classic conservative-reactionary ideology — for example, continued efforts to epater the analytic mind; doctrinal praise for the "oral" and "acoustic" over the "visual"; and the trite but telling equation of the "tribal," the "non-literate," the non-rational, and the unconnected. McLuhan himself is not reactionary in any obvious sense; rather he's a good-natured celebrant of "the new software information age" as opposed to the hard, grubby industrial society he says has vanished, taking the new strobe-light atmosphere for a new order (or disorder) of things.