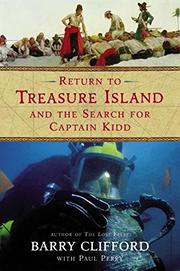 THE RETURN TO TREASURE ISLAND AND THE SEARCH FOR CAPTAIN KIDD

by Barry Clifford with Paul Perry

Long a fascination of the author’s, Kidd left enough of a historical record that Clifford felt he might be able to locate “the real Treasure Island and find an archaeological treasure, the sunken flagship of one of the world's most notorious and misunderstood pirates.” His quest takes him to Ile Sainte-Marie, a current-day possession of Madagascar, in the Indian Ocean, an island considered by Clifford to be the only true pirate island, and where he expects to find the remains of the Adventure Galley. This was where Kidd had been dumped by his mutinous crew after an ill-fated privateering effort put together by a company of colonial and British notables, including the King of England, later much to his embarrassment. Clifford tells the woeful Kidd story well, though it is difficult to appreciate Kidd as “misunderstood”—his ship committed acts of piracy, and he hung for it—or that he had undertaken his ruinous privateering mission to improve his “social standing,” since he was already a man of considerable social and economic stature in New York City. But he was surely a rogue's rogue, and Clifford relates a number of shenanigans, including an episode in which he sent his men aloft to drop their drawers and moon a royal yacht. In alternating chapters, Clifford tells of his three expeditions in pursuit of the Adventure Galley and the endless struggles with Malagassy bureaucrats and a dreadful run-in with another dive team that opened up old rivalries. In the end, Clifford believes he’s located the ship, an excitement leavened by a handful of mumbo-jumbo about being guided by a dream. . . .

No matter: though his efforts to excavate the Adventure Galley are as tortured as Kidd's last days, Clifford still knows how to wring every drop of romance from his pirate-hunting.