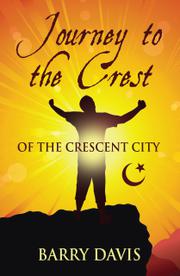 JOURNEY TO THE CREST (OF THE CRESCENT CITY

Debut author Davis tells of his life as a gay African-American man in New Orleans.

Born in 1978, the author grew up in Louisiana without ever seeing much of his father, but his mother always played a major role in his life. After she was baptized as a Jehovah’s Witness in 1988, it resulted in many changes in the young author’s life, including no longer celebrating birthdays, not being allowed to play Nintendo games, and feeling even more alienated in a world that he says often saw him as a “sissy.” Their churchgoing would, in 1990, bring him into contact with a married church member 14 years his senior, with whom he had a relationship that involved “hot making out.” The relationship eventually led to a suicide attempt and the eventual involvement of church elders. The account of the author’s following years show him as he tried to transcend his past and come to terms with his homosexuality, while his family back in New Orleans offered plenty of additional drama. Indeed, the memoir begins with the author’s angry letter, addressed to specific family members, involving a number of issues (someone taking a Camry, someone else stealing Xanax) that won’t be very meaningful for readers who are unfamiliar with the people mentioned. Of greater interest throughout the book is the author’s honest and disturbing rendering of his relationship with the older man—a troubling story, filled with mixed emotions—followed by a glimpse into how religious leaders decide to discipline church members when they feel it necessary. Although later chapters do show more of the author’s personal growth (such as finishing a bachelor’s degree), the events don’t leave the same kind of lasting impression as those of his formative youth.

A carefully wrought look at one man’s tangled journey, sometimes weighed down by too many family details.